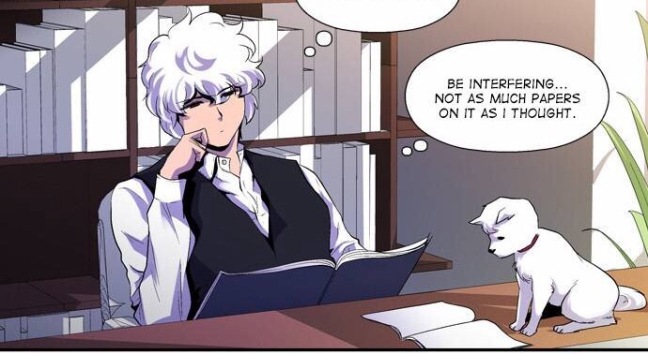 Thanks Icebreaker694 for tagging me! It helps me a lot [with procrastinating on my Webtoon lists]. Never mind that last bit. And, since I cheat, I’ll include Webtoons in this list. Anyway, I hope you like my tag!

Oh, and the Dr. Frost featured image is gonna be my permanent book tag featured image. If, one day, I get a tag that isn’t book related, that’ll be a different story.

Are we talking about enemies, or rivals? Let’s just say both, haha. Hmm…for books, I might say Mina Holmes and Evaline Stoker from the Stoker and Holmes series. Their rivalry is unique; they’re on the road to to becoming good friends one day, but they started off one the wrong foot, and due to being such opposites, it’s taking them a while to truly warm up to the other. They’re good partners in fighting crime, and they’ll hopefully be good friends one day.

Webtoons: Either Sakuya Mori and Haruka Mori from SPLIT or Emai and Phirre from Nightmare Factory. Sakuya and Haruka’s rivalry is unique; they’re the same person! Sakuya has DID, and Haruka is his other personality. However, he has no idea she exists. Emai and Phirre’s rivalry/enemy relationship is just funny; Emai clearly hates Phirre, but they spend a lot of time trading insults…until she “steals” his heart. (Oh, that was a bad joke…)
TURKEY FAILED COUP: A BOOK YOU STARTED BUT FAILED TO FINISH?

Books: Clockwork Angel. I started to read it at the tail end of December, so I didn’t have time to finish it before January 1st. But I love the series! (Currently reading Clockwork Princess…no spoilers).

POKEMON GO: WHAT BOOK DID YOU BUY OR READ BASED ON THE HYPE? DID YOU ENJOY IT?
Books: The Infernal Devices series. And as I am reading Clockwork Princess, I think it’s safe to say that I’m enjoying it. The writing is sharp, and the plot is unique and unpredictable.

Webtoons: Siren’s Lament. I enjoyed this much more than I thought I would; I love instantmiso’s twists on cliché romance tropes, like love triangles.

STRANGER THINGS: WHAT’S ONE BOOK YOU WANT EVERYONE TO READ?

Books: I would say I am the Messenger, but sadly, it’s one of the required reads at my school for a lot of students, and as people generally dislike assigned reading no matter how good it is… So I’ll say Different Seasons by Stephen King. Even if you’re not a horror fan, you’ll like at least a few stories in this. And it has Rita Hayworth and the Shawshank Redemption and The Body (movie is called Stand by Me) in it.

Webtoon: Annarasumanara. At least read it for the sake of the art, but the story is just as beautiful as the art. I promise. Here’s an art piece:

GAME OF THRONES, THE WALKING DEAD, MR. ROBOT: WHAT WAS YOUR FAVOURITE BOOK CLIFFHANGER WITHIN A SERIES?

Book: Hmm… The end to The Chess Queen Engima in the Stoker and Holmes series. Book four still hasn’t come out yet… 😦

Webtoon: Every episode ends in a cliffhanger with Bastard, so…

THE TRAGIC CRISIS IN ALEPPO: NAME THE LAST BOOK THAT MADE YOU CRY OR TEARY-EYED.

Webtoons: I don’t cry over Webtoons either, but the last ones to give me serious feels were: Annarasumanara, Snailogy (mainly the Come with Me chapter. If you only read one chapter of Snailogy, read that one) or Dr. Frost.

BREXIT: NAME A BOOK YOU HAVE AN UNPOPULAR OPINION TOWARDS.

Book: I don’t have a particularly unpopular opinion, but I guess the closest would be me thinking the book version of True Grit is grossly under appreciated. Readers, take note: if you want a fantastic female protagonist, look no further. Mattie Ross is more independent, stubborn and smart at age fourteen than many older female MCs nowadays.

Webtoon: I don’t like the three most popular Webtoons all that much: Noblesse, Tower of God, and Girls of the Wilds.

FOUR NEW ELEMENTS DISCOVERED IN THE PERIODIC TABLE: NAME AN AUTHOR YOU DISCOVERED/READ FOR THE FIRST TIME THIS YEAR.

Cassandra Clare! I plan to read The Mortal Instruments soon.

One of my New Year’s resolutions is to have more diverse reads. I appreciate The Infernal Devices for having different types of feminism, a biracial lead (I may be biased because I’m biracial) and a bisexual character. But my favorite diverse Webtoon may be Always Human, but I also recommend ShootAround.

ZIKA VIRUS: A BOOK THAT SPREAD LIKE WILDFIRE.
I can say I read it before people fussed about it, but Stalking Jack the Ripper.

Webtoon: Space Boy. I’ve read it, and can safely say it lives up to the hype.

LEONARDO DECAPRIO FINALLY WON THE OSCAR: WHAT WAS YOUR MOST ANTICIPATED BOOK RELEASE THIS YEAR?

Mine didn’t come out…Stoker and Holmes book four, where are you?

Book: Spoilers for Girl on the Train:

Tom. Dear goodness, that was a climactic ending.

Manny. I knew it was coming, but I guess I wasn’t prepared for how fast and almost easily he was killed.

SAMSUNG PHONES: ONE BOOK THAT BLEW YOUR MIND THIS YEAR!

Book: The Martian by Andy Weir. It was entertaining, educational, and rooted in real science, and was overall seriously well written, unpredictable, and humorous. I loved the characters. The movie was good, but I prefer the book.

Webtoon: If I had to choose, I’d say Dr. Frost. I wanted to say Annarasumanara, but Dr. Frost is educational, while still having amazing mysteries, a unique story,  interesting, three dimensional characters, and good art.