Like John Reese, the main character of POI, Shaw worked for the government program that tackled the Machine’s “relevant” numbers. She can easily take out a room of guards and soldiers, including a bunch of strong men nearly twice her size. She also has an Axel ll personality disorder, which is what makes her such a lethal operative; she does have emotions, but they’re extremely underdeveloped. Working with Reese, Finch, Root, Carter, and Fusco helps her considerably, and she begins to see the value of human life. Shaw is a popular character in POI (of course, the majority of the main cast is highly liked), as she’s clearly independent and capable. However, the thing that keeps her likable and not feeling overpowered is her highly underdeveloped emotions; she may be a great fighter and strategist, but she’s an emotional disaster. Pair that with a strong personality, and you have a winner of a character.

Mikasa is one of the most powerful Titan killers in AOT, the other being Levi. She’s a natural prodigy; fast, smart, and she makes killing Titans look easy. It’s no wonder she was considered the best of her class. And while she usually looks rather bored or disinterested, she can turn scary in a heartbeat, especially when it comes to the main character, Eren. Mikasa is one of the most loved characters in AOT, but also one of the most hated. Her fans like that she is so capable, and that she has a lot of depth. Her haters feels as though she’s overpowered, and that she’s much too protective of Eren. I have to say both sides have their points, but my conclusion is that she’s a good character with poor writing. I feel as though she’s interesting and has a lot of potential, and I can understand the overprotective part of her character, but I don’t like the fact that she was good at everything right away, and it bothers me that the majority of her character development is based on Eren. So I hope that in season 2 (and the manga!) she can develop and change on her own without him.

Eleven is a telekinetic girl who has been experimented on her entire life. She was used for horrible things, such as entering the Upside Down, a strange dimension, with her powers. When she finally escapes and begins to make friends for the first time, she often uses her powers to protect and save them, especially from the organization that is trying to hunt her down. Eleven is probably the most popular character in Stranger Things, and for good reason; this is a kid who was basically a science experiment her whole life, and yet hasn’t broken down completely. She still has a heart and a mischievous side to her, and she is very selfless, as she is willing to sacrifice her possible chance at a normal life for those she loves. 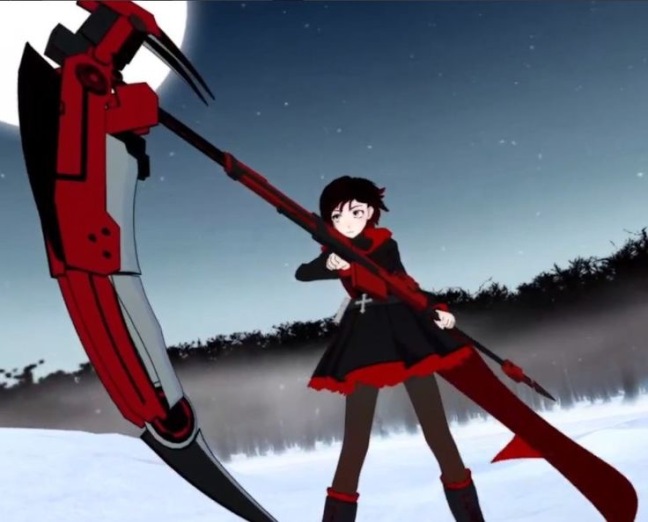 Although I’ve only seen a few episodes of RWBY, the main character definitely stands out. She’s already shown to be powerful and capable, but she’s also a rookie and learning to become a better huntress. I think that’s what I like about her; she’s shown to be gifted right off the bat, able to use a scythe weapon quite well, but also portrayed as impulsive and inexperienced. I like her; she’s enthusiastic and a weapon nerd, cheerful and can communicate well. I really liked the moment when she was able to figure out how to talk to Blake, who is rather quiet and a bookworm. (I need a friend like Ruby in my life, haha.)

Touka comes off as rather cold and easily angered in the beginning, but after seeing what a Ghoul’s life is like, I can’t really blame her. She’s clearly strong; she was able to beat Tsukiyama with her kagune, but I like that it wasn’t portrayed as an easy fight; it was difficult. In fact, it’s her emotional attachments that make her strong; when Kaneki is abducted by Aogiri Tree (can’t spell…), she is determined to help rescue him. What I find interesting is that in each of her battles, it isn’t purely physical strength that helps her win. It’s her relationships with characters like Kaneki, Hinami, and Ryouko that fuel her ability. I’m not sure how popular she is, but I have to say I like her; she’s shown to have more depth than what meets the eye. She breaks down when she’s called pretty, she’s willing to consume human food for her human friend (despite getting sick), and she even feels guilty when Mado, a CCG detective, dies, because he had a family.

7 thoughts on “Analyzing Strength in Women in Fiction: Physical Strength in TV and Anime”