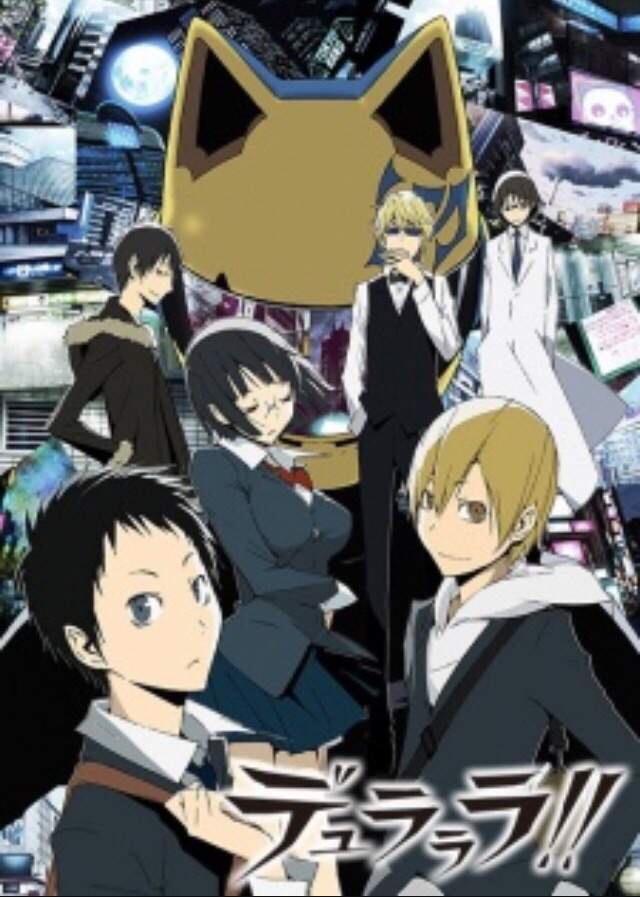 You guys might remember my review on the first Durarara light novel back in June, right? (Though with my sudden surge in followers, likely not…) Well, at the time, I was watching season 1 of the anime with my mom. Yeah, probably wasn't a good idea to read the books and watch the show at the same time, right? I wasn't surprised by anything! So I have learned my lesson with season 2, which we started a few days ago.
Okay, that was a tangent. Onto the review! 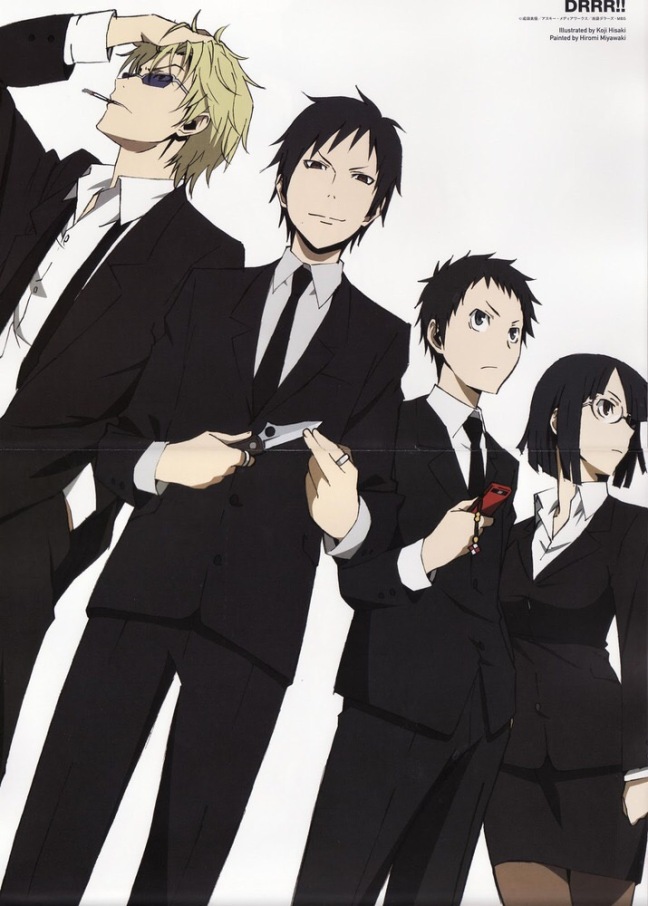 Summary: (how does one even write a good summary of DRRR….it's so crazy, you can't.) In Tokyo's downtown district of Ikebukuro, amidst many strange rumors and warnings of anonymous gangs and dangerous occupants, one urban legend stands out above the rest—the existence of a headless "Black Rider" who is said to be seen driving a jet-black motorcycle through the city streets. Mikado Ryuugamine has always longed for the excitement of the city life, and an invitation from a childhood friend convinces him to move to Tokyo. Witnessing the Black Rider on his first day in the city, his wishes already seem to have been granted. But as supernatural events begin to occur, ordinary citizens like himself, along with Ikebukuro's most colorful inhabitants, are mixed up in the commotion breaking out in their city.

Story: 4/5: I am astounded by how insane the story was. In a way, despite getting spoilers from the books, I think, in a way, they helped me keep track of what was going on. Anyway, there truly is no set "story"; it's mainly the characters that drive this, and there are three "arcs" total, the first two helping to set up the last one. The first arc deals with the legend of the "Headless Rider", a mysterious figure in a black jumpsuit who rides a motorcycle that has no headlights or license plate, and which sounds like a horse while revving up. The figure in general also sports a helmet that looks like a cat helmet. The first arc also involves a mysterious gang known as The Dollars, who don't have an identifying color. Basically, while the Headless Rider is the main plot point for a while, the first arc also introduces the main cast and sets up the situations to follow.

The second arc involves mysterious slashings going around Ikebukuro, and the third arc involves a gang war with roots involved in the first arcs.

One thing I appreciate about this series is that everything is connected, if you look hard enough. Even the smallest things are connected. It may be hard to notice at first, but once you start to pay more and more attention, those small details leap out at you. It also has a ton of foreshadowing; I rewatched the second episode with a friend of mine recently, and I think I worried them a little when I started laughing at the foreshadowing. And it is for that reason I can't explain much of the story to you, too many spoilers.

Characters: 5/5: Ohhhh boy. The characters. Gah, this can become messy quick. There are a ton of characters, oh dear. And they are insane. Every single one of them. I can count on one hand the most "normal" ones, and even then they aren't normal. I'm only gonna talk about the most recurring characters, otherwise this post will get really long and use up all my storage space for photos. 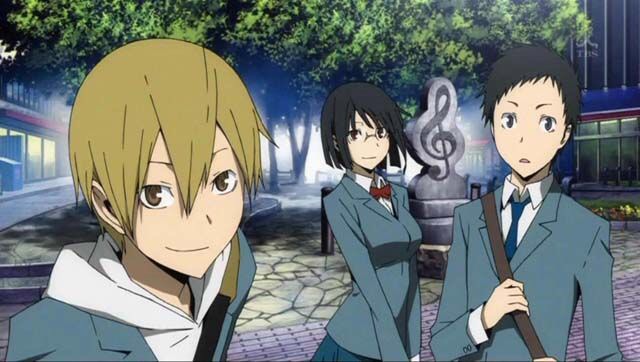 The main characters in the anime are different than the light novels. The character who is likely the protagonist is Mikado, the dark haired guy in this picture. He seems to be this timid, really quiet kid who wants to explore and to find something extraordinary. He was invited to go to Ikebukuro's Raira Academy by his best friend, Masaomi, and now he tries to find the extraordinary there. Masaomi is funny, makes bad jokes, and is a flirt. The girl is Anri, a shy girl who seems unusually distant, and is worried about a friend who has gone missing. Naturally, there's more to all three than meets the eye. A lot more.

(This next part WILL contain mild spoilers for the Headless Rider. Sorry, no way around it).

In the novels, it's actually Celty Sturluson who's the main character. She is also an Irish, headless fairy known as a Dullahan, and is currently searching for her head. Despite Dullahans usually being associated with death, she's actually very kind, and becomes a supportive friend to many characters. She's also really badass, able to ride a motorcycle (that's actually a horse) and wields a scythe made of shadows. Shinra is a black market doctor, who found Celty when he was four years old. He's happened to be in love with her ever since. Celty has lived with his family for twenty years, and is now his roommate. 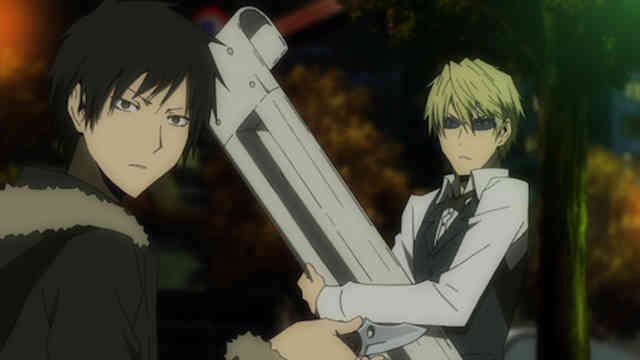 Chances are, even if you don't watch this, you may have seen these two somewhere. Izaya Orihara is the dark haired one. He's an information broker, and the main antagonist. He's one of the most fun characters to watch, and he's just one of those "likable" villains. Like Moriarty. He's also a major troll, and despite his childish attitude, he's actually an expert in mind screwing. Shizuo Heiwajima is the guy in the bartender suit. He has a wicked temper, and is known as the strongest man in Ikebukuro for a reason. He hates Izaya with a passion, and whenever they see each other, they basically try to kill each other.

There are a ton of other characters. These include Simon, a black Russian sushi chef who always tries to get people to eat at the Russian Sushi restaurant; Kadota, Erika, Walker, and Saburo, members of the Dollars; Namie Yagiri, the owner of Yagiri Pharmaceuticals who eventually becomes Izaya's secretary (their rapport makes me think of what the dynamic would be if Moriarty had a Watson helping him); Seiji Yagiri, Namie's younger brother, and Mika Harima, Seiji's stalker and Anri's friend who mysteriously vanished.

Animation: 3.5/5: The animation itself was great. It was fluid, sharp, clear, and could be really cool and unusual looking. But my main gripe was that there was some same face syndrome going on. Often enough, characters looked really similar, and in a large cast like this, that makes for some problems figuring out who is who. But the animation itself was great, and even if the faces could be problematic, the rest of the character design was really good. And even though the art style (as I said) could make identifying characters difficult at times, it improved as the story moved on and we started to know the characters better.
And because I couldn't find a better GIF that shows off good illustration without having spoilers, here's a GIF that illustrates just how much Shizuo and Izaya hate each other:

You know someone doesn't like you when they throw a trash can at you from a distance.

Anyway, one of the best parts of the animation (to me) were the backgrounds. They were really stunning, and one part that stood out to me was the episode illustrating Celty's backstory. Those were amazing backgrounds.

Sound: 4.5/5: I think it says something that I put both of the show's OPs in my favorite anime themes list, right? And as promised, here is a collage of the still images in the first one: 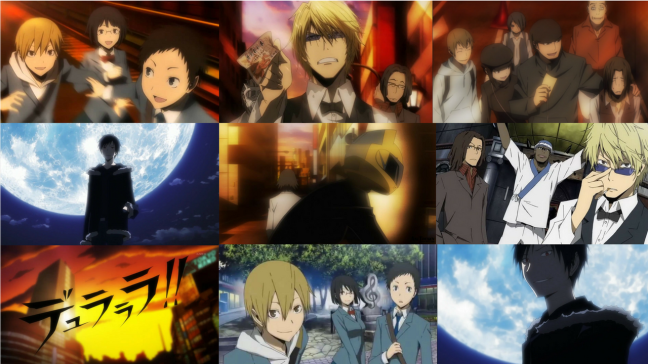 You guys better appreciate this. You will not believe how long it took me to put this together.

Anyway, the OPs (Treacherous Sunset and Complications) were both awesome in their own way, and of course, the first ED, "Trust Me", also known as the beginning of a lot of parodies, was very catchy, fun, and visually unique. The second ED was good, but harder to focus on the characters in the visuals.

The OST was great, of course. You can find it on YouTube. It definitely sounds like urban city music. As someone who has visited plenty of those, I can say it sounds like music they could play on the streets. Some notable tracks would be "Their Aspirations," "The Sought After Extraordinary", "He's Such a Coward that He Can Laugh", "The Legend of the Strongest Man in Ikebukuro", and "Bottled Angel".

I watched the English dub this time around, mainly because I wasn't watching this alone. But even if I were, I doubt I would have watched the sub, save for an episode or two. The dub was perfect, in my opinion. Everyone sounded amazing, and even while reading the novels, I can only read it in their voices. Some of the best performances would be:

Kari Wahlgren as Celty. Even though Celty only speaks through texts and messages, she is able to sound like a supportive big sister helping others with their brushes with the supernatural, a tough Headless Rider worthy of the legend, and a tsundere when it comes to the person they like.

There's Crispin Freeman as Shizuo, who can sound like the one guy on the planet you don't want to tick off, but can also be fairly laid back and relaxed…when he isn't mad.

There's also Yuri Lowenthal as Shinra, who is able to balance out the the nerdy scientist, the pervert, and obsessive but genuinely loving aspects of the character's personality.

Steve Blum as Kadota sounds cool and awesome as one the very few sane characters, and who has to deal with a strange group which consists of two otakus and a car maniac.

But of course, the standout performance is Johnny Young Bosch as Izaya. Man, this is one voice actor who can play both heroes and villains perfectly. He can portray the dangerously childish antics, the trolling, and the mind screwing the character does perfectly. He was so perfect for the role, I can't imagine anyone better.

World Building: 4/5: The world of supernatural Ikebukuro was perfectly brought to life. In a way, the city is a major character, as it has a ton of personality, even if it isn't an accurate representation of the real life city (one of my friends visited there…she said it was much less dramatic, and no, she didn't see a Headless Rider or a guy throwing a trash can at another guy. Bummer). It manages to balance the supernatural and the gangs pretty well.

Final Grade: 4/5. While DRRR may not be as addicting as, say, Attack on Titan, that's okay. In a way, that's a good thing, with all the chaos. But it's the way the chaos flows and even becomes somewhat organized, that makes this anime worthy of its popularity. With a zany cast, good animation, an awesome soundtrack, and interesting stories, I definitely recommend this anime.

(Self advertising time): For my biweekly Q&A, I need questions. So far, only one person has asked me questions, and I need more! I would appreciate it if you guys asked me stuff.