Despite the fact that my ComiCon was back in July (time flies, doesn’t it?) I’ve had this post on the back burner for a while. Why? Writer’s block, when it comes down to it. I tried to write this for forever, but﻿ never could.

My family wasn’t terribly organized when we went. We wanted to go to some panels, but didn’t make a plan to go see any. Whoops. We mainly wandered around looking at the art and merchandise. However, we did plannone thing: a lot of Webtoon artists and behind the scenes workers were there, and I was definitely stopping by there the signing!

My dad managed to meet one of his favorite comic book artists: Neal Adams. My dad has a ton of the comics he has done, and says he’s likely as influential in comic book art as Jack Kirby. That being said, he was surprisingly relaxed when meeting him, talking to him, asking for advice, and even getting a poster that he was selling signed. That was cool!

As I said, the majority of time was spent looking at art until we got lunch. We ate, and went to the Webtoon signing! I managed to get closer to the end of the line, which is actually good; it means you get to talk to people longer because there are less people behind you. Just a tip. 🙂

As we waited in line, we even got some free merchandise, like a bag, a rubber bracelet, three miniature sketchbooks, a pin with the Webtoon insignia, and coolest of all, a Noblesse poster! (I need to get back into that series, don’t I…?) Also, one of the workers (I’m not sure if it’s okay to say her name, so I’ll leave her anonymous for now) came up to everyone and we all chatted for a bit. We even got to ask her some questions. Naturally, I asked about Dr. Frost season 3. She said they were pretty sure that it would be translated in the future. They just haven’t made the proper arrangements yet. Needless to say, that was a relief to hear.

And then…I got to the front of the line and got autographs from Ryan Dunlavey (draws Polidiocy…and was kind enough to autograph despite my not having read it 😅) Stephen McCranie (writes and draws Space Boy!) and Snailords, (writes and draws Nightmare Factory and Snailogy):

Heck yes! 😎 It was amazing.

But that’s not all…remember when I posted about one of my comments being in a Nightmare Factory special episode? Well, when that happened, I was talking a friend, and I basically said: “If Snailords ever comes to a nearby ComiCon, I am going to print out a photo of that comment and ask him to sign it!” And ironically enough: 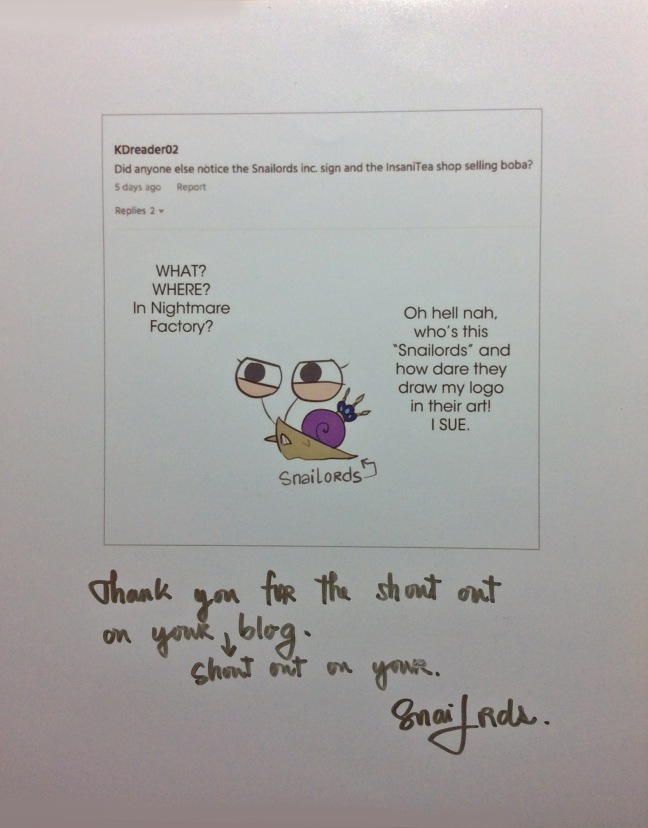 Also, my interactions went kinda like this. Ryan Dunlavey was nice enough to give me a cool doodle, even though I admitted I haven’t yet read Polidiocy.

Snailords had actually made a post online saying food would be welcomed, so I actually ended up bringing him some blackberries, which I was actually able to find in an Instagram photo of his: it is the only healthy food there, the rest is cupcakes and heaven. 😅 And guess what? He does talk the way he does in Snailogy. After the blackberries, I took out the photo of the comment, and guess what? He. Recognized. My user name. From the comments section. 😱. Snailords actually remembered me! My mind kinda stopped working there for a moment. No, not for a moment…for the rest of the day! Now my mom wants to get the comment photo framed. My mom also took a photo of us, and I got to hold the cute Kreyul doll.

Stephen McCranie was there with his wife, and they were low key cosplaying as Oliver and Amy; he had the shirt, and she had the pigtails! It was really adorable. I was able to ask them for character writing advice, which was a mix of: take what you know from what you read, observe, and use past experiences. My mind was still shorted out from the previous encounter, and so I began to leave when I remembered things I wanted to say to him. I don’t want to repeat what I said there, because it’s how a  part in Space Boy helped me with an old experience of mine. Since what I said was pretty much improv, I’m not sure it made much sense. McCranie is even kinder than he appears in the comic. So…I have to say thanks so much.

Afterwords, we got to just walk around. I ended up buying the cutest T-shirt I’ve ever seen:

Is it not perfect?

Also, I got to talk even more with the woman who works at Webtoons. I mentioned my blog to her, and I can say she has seen some of my Webtoon stuff! I won’t talk about that now though, because of reasons…let’s just say I may have some news in a while related to that. Stay tuned,

After a while, we left to go eat. Now, I was stuffed on gourmet pizza and cheesecake, so I may not have seen right….but I’m pretty sure the kid who played Dustin from Stranger Things walked right by the window of the restaurant where we were eating. I’m 99% sure.

That’s it, the story of one of the best days of my life.

While doing some research on this topic (coming up with ideas for a dream ComiCon), I discovered  Eventbrite, and here’s the Online event registration page too. It’s a ticketing platform that helps people find and plan events.  I came up with a few questions to answer too, for detail: What would you wear? Who would attend? Who would you like to meet?

Anyway, for me, the location would have to be near where I live. Many of you may piece together the general area where I live by my description of my ComiCon. But I still don’t feel comfortable saying it publically, so if you’ve deduced, do you mind keeping it a secret? Thanks.

VoiceWhat would I wear! I’m not much for cosplay. But if I went with a group outside my family, I could do a group cosplay. On my own, I’ll just dress like myself, like in shorts and a t-shirt.

Who would attend? I believe this correlates with the second question: Who would you like to meet?

I think it’d be cool to have writers. I love to write, so some would be: Leigh Bardugo, Barry Lyga, Cassandra Clare, Victoria Schwab, Markus Zusak, and William Ritter, to name only a few. It’d be awesome if some of them could host a panel about writing; about the process, writing good characters, plot twists, relationships, getting published, etc. It would be amazing.

It’d be cool to meet people from shows like Sherlock and Person of Interest too! Both shows have some of my favorite actors, and great writers. Why didn’t I mention Doctor Who? Well, I met one of the actors the year before this: John Barrowman! He even signed my test copy of the book I self published…even though it was filled with typos and poor writing.

Of course, I’d love to meet other Webtoon artists besides the ones I met. That would be amazing.

Anyway, I think that listed the whole dream ComiCon…I hope. I know there’s stuff I’m missing, well, just expect me to update this a lot!

5 thoughts on “Two Posts in One: My ComiCon Experiance + Dream ComiCon”