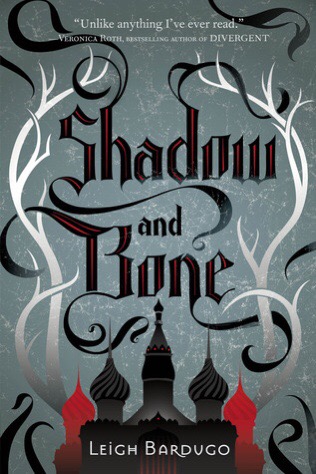 I decided to try this series (or at least the first one) before tackling Crooked Kingdom. I wanted to see if would expand the worldview and help clear up some more confusing things or not. Also, because of Traces, I started this review very late…let’s just say I’ve read Siege and Storm, which I liked much more. Let’s hope this doesn’t mess this review up…

Also, because I wrote this review so late after I read the book, I will leave out pros and cons.

Summary: Surrounded by enemies, the once-great nation of Ravka has been torn in two by the Shadow Fold, a swath of near impenetrable darkness crawling with monsters who feast on human flesh. Now its fate may rest on the shoulders of one lonely refugee. Alina Starkov has never been good at anything. But when her regiment is attacked on the Fold and her best friend is brutally injured, Alina reveals a dormant power that saves his life–a power that could be the key to setting her war-ravaged country free. Wrenched from everything she knows, Alina is whisked away to the royal court to be trained as a member of the Grisha, the magical elite led by the mysterious Darkling. Yet nothing in this lavish world is what it seems. With darkness looming and an entire kingdom depending on her untamed power, Alina will have to confront the secrets of the Grisha . . . and the secrets of her heart.

Story: 3.5/5: Okay, this story has potential…but for a first book, it just felt…formulaic (?) I dunno, I just had the same feeling reading this as I did watching some movies, in particular The Force Awakens (I dunno why I kept thinking of TFA while reading this. Maybe it’s because they both involve a girl in the “light” and a guy in the “dark”, and have a surprising amount of snow in them? I dunno, I’m writing this review late at night, don’t mind me…)

Basically, back on task, what I meant was that I felt as though I could accurately predict the basics of what would happen, but not the details. Although I wasn’t able to predict everything, I still was able to guess enough that I was vaguely disappointed.

However, I do think this was a solid starter book. It had a lot of details and basic plot elements that were definitely needed to set up the rest of the series. Even if I found it somewhat easy to predict, there was a charming factor about it that made it compulsively readable. I also did like the expansion on the Grisha in general, which was something that intrigued me in Six of Crows.

Characters: 3/5: Similar to the story, the characters have plenty of potential. However, it may be that I read Six of Crows first, but I can’t believe that the author who wrote such amazingly well written characters there also wrote these characters. These characters weren’t bad, in fact they were pretty interesting. They just never leapt off the page the way the Crows did.

Alina is someone I have mixed feelings on. She just felt like the classic YA heroine, always feeling and rarely thinking, and often makes impulsive decisions. I also don’t like how much romance is on her mind. I can understand her fixation on Mal (she has known him all her life) but I felt it was a little overboard at times. And I feel as though the attraction (which may or may not have been one-sided) between her and the Darkling needed more development to truly be compelling. I’m only glad the reason behind why her Grisha powers took so long to manifest was explained. I can see fantastic character development possibly happening with her, which I really want.

Mal left me feeling underwhelmed, in a way. I know much of the fandom hates him and some of the fandom loves him, but I never held particularly strong feelings about him. I feel as though he and Alina would be easier to ship if that desire to stay together that was prevalent in their childhood had remained stronger; instead it felt like they we already drifting apart before Alina found out she was a Grisha. So, I can safely say I don’t particularly love the character, but I don’t hate him.

The Darkling fits the mold of villains I like, as in, incredibly interesting…but I think a lack of page time did some damage to the character. I couldn’t find him as interesting as the rest of the fandom does. His connection with Alina is intirguing, but again, it needed more time to develop, and more scenes with them interacting. I love a good light vs. the dark dynamic, but I  feel as though their connection could’ve been prolonged until the next book. While I will never understand why the fandom ships him and Alina, I do hope their dynamic gets more exploration.

Some people complain that this book is too black and white morality wise. Well, I don’t think that’s true, because there’s a character that falls into the gray perfectly: Genya. She’s funny, sweet, and a great friend to Alina. But she also has a darker side to her personality, and truly craves acceptance. She was a scene stealer, and I found her to be surprisingly interesting.

Writing: 4/5: Bardugo has a way with words. Even if I found the book to be easy to predict, there was a something about it that made it fun to read and easy to get lost in, similar to Six of Crows once it got going. Her writing was lovely as always, and was a major factor in my enjoyment of the book.

Details: 4/5: I also liked the details. I could envision the characters so well, yet their descriptions weren’t overdone. The only character I couldn’t quite see was Mal, but the other characters were detailed. The descriptions of the surroundings, food, and clothes also made this a more engrossing read.

World building: 3.5/5: This was harder to grade. However, since a part of me reading this was to clarify some parts about the SoC world, I felt some parts to be lacking that I didn’t find so much in SoC, mainly in the countries. Ravka was shown to be derived from an older Russia, which I found interesting. But I hope to gain insight on what real life countries inspired the fictional countries. I did appreciate the expansion on the Grisha, as in who they are and what they do.

Grade: 3.5/5. This book has plenty potential, but I felt as though there were too many interesting parts that were sadly underdeveloped. I also found this a little too easy to predict. However, as I have read the second book, I can say this series definitely improves. So if you didn’t care for Shadow and Bone, I encourage you to give Siege and Storm a try.