Okay, when I first read the summary, I didn’t expect the story to be like this, let’s just say that. I expected something different…but I’m not disappointed.

Summary: When you have an invisible roommate.

Story: 4/5: This isn’t a typical ghost story. It delves into topics that most ghost stories don’t have.

It follows Yuri So, a woman who has been able to see ghosts since she was a child. However, this has had a negative impact on her, and not fully because of people; a lot of it is because of the ghosts she sees. She tends to ignore them because of an incident in her past, and has become painfully quiet and unsocial even with people. However, when her new house turns out to be haunted by a ghost named Jun, she begins to come out of her shell and learn things. They start to become friends, but naturally they aren’t without their problems. 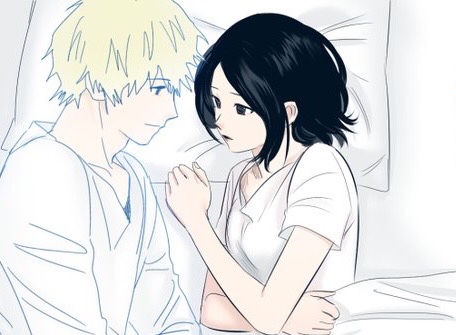 While this naturally turns into a romance, it’s interesting to see their evolution change from strangers to friends and then to something more. It feels more slow and in a way more natural than most love stories. But this deals with how Jun being a ghost impacts their relationship, and in different ways than most paranormal romances show. This is a different take on the genre.

Characters: 4/5:. Even though there are other characters than Yuri and Jun, aside from one, they don’t make a huge impact on me.

Yuri is definitely different than most people who see ghosts. While most people who see ghosts are often scared of them before warming up to them, Yuri’s had a bad past with ghosts, and ignores them. This means never mentioning her ability to anyone. As a result, she’s a loner and not very emotional. Her character journey is both amazing and bittersweet to watch happen.

Jun is also a unique take on a ghost. He’s (for the most part) cheerful and sweet, but also incredibly lonely. He’s been stuck in his home for three years without anyone being able to see him. So when Yuri moves into his house, he becomes desperate to talk to her. He eventually succeeds (of course). Behind his friendly nature, he’s still in a lot of pain after his death.

Art: 4.5/5: This is a very understated and beautiful art style. It may not be as flashy or blatantly amazing as some Webtoons, but it’s also very subtle. The pale coloring matches the world, and there is so much detail in the backgrounds. The character design is also unique, and is it weird of me to say how I love how the artist draws hair? I also like how Jun was colored.

Writing: 4/5: This is a slower story. There isn’t a lot of action. But it is very interpersonal and is mainly about the characters before anything else. This is a character driven story, and delves deep into their minds and their feelings. It also talks about areas of being a ghost that may have been mentioned in other pieces of fiction, but this explores them in different and more unique ways. The dialogue is also good.

World Building: 3.5/5: The world building is just normal, I suppose. It doesn’t give too much of an insight into their world. It’s mainly just the real world.

Grade: 4/5: This is a very moving, emotional piece of work. If you like paranormal dramas that explore new sides to the genre and a great character based story, this is a Webtoon you should probably check out. You can find it here: My Boo

2 thoughts on “Webtoon Review: My Boo”