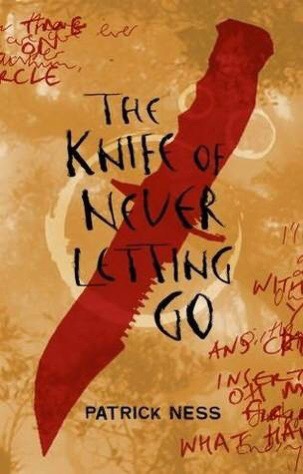 This is a book I’ve heard a lot about for a couple years, and I finally decided to give it a try.

Summary: Prentisstown isn’t like other towns. Everyone can hear everyone else’s thoughts in an overwhelming, never-ending stream of Noise. Just a month away from the birthday that will make him a man, Todd and his dog, Manchee — whose thoughts Todd can hear too, whether he wants to or not — stumble upon an area of complete silence. They find that in a town where privacy is impossible, something terrible has been hidden — a secret so awful that Todd and Manchee must run for their lives.But how do you escape when your pursuers can hear your every thought?

Story: 4/5: This wasn’t what I was expecting. I thought it would be a dystopia, not a dystopia with pure sci-fi elements (like aliens and planets). I was turned off by this at first, but as I went on I liked it more and more. It’s about Todd, the last “boy” of Prentisstown. Basically, when a boy turns 13, he’s no longer a “boy”, but a “man”.

A quick note about Prentisstown: Here, everyone can hear everyone’s thoughts with “The Noise”. I appreciated how Ness showed off people’s thoughts; they aren’t organized and neat like how you see it with telepathy. It’s a mess, which seems more real. Also, there are no women; the “Spackle” (Alien natives) infected everyone with “The Noise”, and while the men survived, the women didn’t.

Anyway, Todd and Manchee are on a walk in the swamp, when they encounter something strange: silence. Just a patch of silence. When they get home, he manages to tell his adoptive parents this (Ben and Cillian), but to his surprise, they become desperate to get him out of Prentisstown. But just as he’s about to leave, the mayor’ son arrives at their doorstep. Todd, Manchee, and Ben run, but Ben turns back for certain…reasons. As Todd and Manchee are on the run, they encounter someone strange: a girl who seems to emit silence, rather than Noise.

Characters: 4/5: This felt very personal, like we were in Todd’s head. A lot of this has to do with the writing style; it’s different, to say the least, but manages to work to create suspense, and genuinely understanding Todd’s feelings. Todd is a kid who hasn’t been informed of much, and so he often makes dumb choices. But he learns from his mistakes, which is what propels his character development and makes him so endearing.

Viola, the girl, is also interesting. She starts off as quiet in both the Noise way and actually talking way. It takes her a while to speak. But she proves to be very smart, capable, independent, and tough. Like Todd, she does make mistakes, but she also learns from them. She and Todd form an incredibly strong friendship that I can’t see anyone disliking.

And then there’s Manchee. Oh my gosh. What a good talking dog. I’ve become more dubious of talking animal characters in YA fiction as of late, but Manchee…he is so cute, he’s brave, sweet, and loyal to Todd and Viola. He’s a dog, so not much development, but he’s such a sweetheart.

Writing: 3.5/5: Okay, this is hard to grade. Let’s say that I was reminded slightly of Huckleberry Finn while reading this, as everything said or narrated by Todd is told in Prentisstown slang. Like, “tho”, instead of “though”, or “yer”, instead of “your”. Plus, there are plenty of purposeful misspellings. This made it very difficult to get into the book at first, as I am not accustomed to this sort of dialect, and didn’t care for it. But as it went on, I grew to actually enjoy it, and it worked for the book. In fact, the dialect and frequently short and choppy sentences helped to increase suspense, something several thriller books I’ve read haven’t accomplished. So, let’s just say that I didn’t like the writing at first, but grew to like it a lot and that it matches the novel.

Details: 3.5/5: This is tricky. Some parts were pretty detailed, like towns and the Spackle, and of course, the brilliant depiction of The Noise. But when it came to the characters, I couldn’t visualize them that well. I had vague impressions of what Todd, Viola, Manchee, Ben, and Aaron looked like, but thy wa it: impressions. I couldn’t strongly visualize them, which I didn’t like.

World Building: 4/5: This is a world shrouded in mystery. Despite The Noise, we are kept just as in the dark as Todd was, if not more so, as Todd keeps hiding his realizations to himself. It’s truly an interesting world though, and it’s revelations are shocking and yet make a ton of sense. It’s described well.

Grade: 4/5: This book takes a while to get into because of the writing style. But it becomes thrilling, emotional, (boy, did I get some feels) and incredibly tense and suspenseful. This is less a dystopia, and more a science fiction. Usually I don’t care for science fiction books with aliens, but I enjoyed this.

10 thoughts on “Book Review: The Knife of Never Letting Go”