Usually, when I read a book, I end up liking it. That's because I'm picky with what I choose. But sometimes I find a book that's a dud. Sadly, this was one of those times. I read this a year or two ago, and liked it well enough. I decided to pick it up again to see what it was like later. I was very disappointed, and I don't know why I liked it the first time. 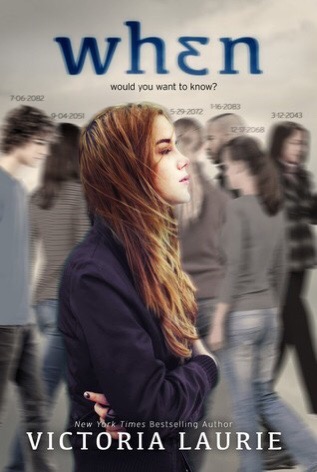 Summary: Maddie Fynn is a shy high school junior, cursed with an eerie intuitive ability: she sees a series of unique digits hovering above the foreheads of each person she encounters. Her earliest memories are marked by these numbers, but it takes her father’s premature death for Maddie and her family to realize that these mysterious digits are actually death dates, and just like birthdays, everyone has one. Forced by her alcoholic mother to use her ability to make extra money, Maddie identifies the quickly approaching death date of one client's young son, but because her ability only allows her to see the when and not the how, she’s unable to offer any more insight. When the boy goes missing on that exact date, law enforcement turns to Maddie. Soon, Maddie is entangled in a homicide investigation, and more young people disappear and are later found murdered. A suspect for the investigation, a target for the murderer, and attracting the attentions of a mysterious young admirer who may be connected to it all, Maddie's whole existence is about to be turned upside down. Can she right things before it's too late?

Story: 4/5: The story and idea aren't bad at all. In fact, it sounds amazing! It was the idea that drew me to this book. Even if Maddie's power sounds seemingly similar to the Shinigami Eyes in Death Note, I was totally okay with that, because of how cool it was. Most of my complaints can be found in the details section. But let's just say that the idea (Maddie being able to see death dates and finding a murderer, possibly using her power to find them, despite being a suspect herself), was an amazing, unique idea I couldn't wait to read, but the execution was…really below standards. But, while I may have had my suspicions on who the murderer was and therefore wasn't totally taken by surprise, it was still a good twist.

Characters: 2/5: The characters were such a disappointment. Maddie is okay at first, actually really sympathetic, but as it turns out, she isn't as smart as everyone in the book claims her to be. Everyone thinks she's Ivy-League material, but she ends up making the dumbest and most immature decisions you can. When she thinks there's another potential victim, what does she do? She sends the girl a weird, anonymous birthday card from "a secret admirer". Like, no. I don't know what I would do, but I wouldn't do that!

"Stubby", her best friend, is how to not write a best friend character. He helps Maddie in her dumb decisions, and even makes stupider decisions, often letting his crushes or feelings get in the way without thinking about how suspicious he makes himself look. I just got the sense throughout the book that neither Maddie or Stubby understood just how serious a situation they were in.

Maddie's mom just felt like a clichèd alcoholic parent. Not outright abusive, but definitely emotionally abusive. Maddie's uncle was okay, but not particularly memorable. The FBI agents on the case (yes, FBI agents. Yes, this is a murder case, but I don't think the FBI would be involved) are just…unintelligent. Their methods of questioning, especially concerning Maddie, including making her feel sick with crime scene photos and constantly freaking her out and following her, are ridiculously unethical and unrealistic. If this was real life, they would be dismissed from the case. And I couldn't get why they focused SO much on Maddie and Stubby, just because the missing boy's mother (who was stressed and grieving) accused her. The characters just felt like they were taken to a ridiculous extreme. Oh, and the "mysterious young admirer who may be connected to it all," doesn't make an appearance. Are we talking about Aiden, Maddie's crush? While I can appreciate the lack of romance, Aiden doesn't seem to make an impact on the plot at all, and the role promised in the summary never comes up.

Writing: 2.5/5: Laurie's writing doesn't make an impact on me at all. It just feels emotionally flat, somehow. When Maddie tries to get a hold of her mother (who's in rehab), but is unable to do so and is upset about that, she says something along the lines of, "That really bummed me out". That just seemed…I don't know how to phrase it. If the intention was to sympathize with Maddie, I couldn't.
Plus, there were typos. Several typos that I noticed in my first time reading. I've read translated books from other countries with less glaring typos. One notable one was with the character of Ms. Matsuda. For the most part, her name was spelled correctly. But at one point, she was "Ms. Matsudo". I'm sorry, I know Japanese names can be difficult to spell, but Matsuda isn't really one of them.

Details: 1.5/5: This is the lowest rating I've given anything. But this book was so unrealistic, I cringed. First off, the FBI wouldn't even investigate this case. Second, their questioning, especially with Maddie, was so unethical, they would be dismissed from the case. This involves making her feel sick from photos of the crime scenes, following her around, and freaking her out. This would be bad with an adult, but with a minor? No way they would go so far! It just didn't seem real.
Maddie's mom could've been handled better too. She just felt like a clichè, but then they also add that after rehab, she's doing amazingly better. It doesn't go like that! Rehab isn't a total miracle, it's still hard. It doesn't just cure the problem, it's a major part of the process to getting better.
My other main problem (besides the poor representation of the FBI) was Maddie's school. I am so tired of the "weird girl" only having one true friend. I feel like it'd be more realistic for her to have a couple of friends, not close friends or best friends, but decent people she can hang out with, but not always feel like they're "a part of the group". It just doesn't ring true that she'd only have one real friend in this situation. I would've liked it more if she had one close friend, but a few other people she can talk to.
Also, when Maddie's under suspicion of murder, everyone at her school (except Stubby and one teacher) turn against her. The teachers turn a blind eye to her bullying, and even encourage it at points. No one does anything to help her. I don't care if she's under suspicion of murder, most teachers wouldn't do that! She's a good student, but they bully her through cold words, ignorance, and unfair grades as much as the students verbally abuse her, beat her up, and vandalize her property. This book had no subtlety.
BUT, one thing I liked was that the death dates weren't set in stone. They could change, according to circumstances. I loved that. It felt realistic, like actual life.
World Building: 2.5/5: Again, no subtlety. The school didn't feel right. Not every student would be so against her, as would the teachers. Not everyone would turn against her with such a vengeance.
Outside the school, it was fine, just another town. But the points being made were just so loud, it was irritating. Yes, we get it, innocent until proven guilty, don't be judgmental, keep an open mind, etc. Could you use more subtlety? Sometimes less is more.

Grade: 2.5/5. I was really disappointed in this book. It had a ton of potential to be amazing, but fell flat due to being really unrealistic, both in the execution and in the character writing. Plus, the summary was really deceiving, at least for me. But please take my review with a grain of salt; I may have been more disappointed than was fair because I had really high expectations for this book. I encourage you to read this and decide whether it was good or bad for yourself.

4 thoughts on “Book Review: When”